As I sat in Ruby’s Vintage, a tapas bar in Harlem at the former home of the legendary actress and activist Ruby Dee, I didn’t quite know what to expect from the person I was about to interview.  If you watch reality shows, more specifically, Love & Hip Hop New York (LHHNY) (my not-so-guilty, guilty pleasure) you may be familiar with Yandy Smith.

We met her in Season 2 when she came from behind the scenes after co-developing the concept for the show and serving as a producer.  There are a few questions that definitely came to mind especially since you never quite know what to expect from “reality”.  Is she really who she portrays herself to be?  Are there going to be cameras and a production team with her?  Is another character from the show going to show up and show out throwing drinks or hands?  With the New York arm of the franchise now in its 9th season, we’ve grown to know Yandy as the no-nonsense business woman from Harlem who’s fiercely committed to her family.

In our conversation, we explore a different side of her, one that is grounded in her purpose of helping others through philanthropy and civic engagement. From providing disaster relief in St. Maarten to helping young girls through her nonprofit EGL PUD (Partners Uplifting Our Daughters), Yandy opened up and proved to be a young woman focused on the right things – family, her business, and giving back.

Of course, the reason I sat down with her was because of her philanthropic work that we’ve been given a glimpse into through the show, but what I didn’t know is that she’s been doing this for years. It’s not a story angle to keep her relevant on the show – it’s something that she does on and off camera.

Knowing the Love & Hip Hop franchise, it’s not uncommon to see contentious situations and the characters literally coming to blows with one another.  But not Yandy.  Although having her share of disagreements, she manages to stay above the fray and keep her fights verbal and not physical.  The moment she walked in and we greeted one another, I knew I was meeting and talking to the person I had seen on screen.   Focused, mature, and about her business—the girl next door.

You Want Reality, You’re About to Get It!!
It was immediately clear that Yandy is purpose driven.  We began our conversation with her time on Love & Hip Hop where she shared that the concept of the show began with an idea for her client, rapper Jim Jones.  The show, “Keeping Up with the Joneses,” would chronicle his life, family and career.  Things took a turn when major tragedies and life issues arose with his artists that would make having cameras around constantly too intrusive. Yandy reached out to Mona Scott-Young who also had an idea for a show.  The show would be about women behind the scenes in hip hop. Once the two ideas were combined, Love & Hip Hop was born.  After the first season, she felt that there was more to the story – that there were educated women who were doing their thing in the entertainment business and weren’t defined by who they were in a relationship with or married to.  Mona suggested Yandy join the cast of the show and despite her reluctance to be in front of the camera, she said yes.   Yandy is very clear that the platform she has with the show is an opportunity to make a difference in the world and amplify the work she does professionally and philanthropically.

In my real life, in the life that I am proud of, my platform which is the show—has given me an opportunity to really do more.  Those are the things that I care about more than anything.  That is where I find purpose.  That is where I find, ‘This is what it’s about!’  I don’t think that I was put on Love & Hip Hop to be famous.  My goal and mission in life is not to be famous.  I don’t feel like I’m put on that show to show the latest styles and fashions.  I’m not fashionable like that.  But I do feel like I needed a platform to be able to help people and make a difference.  That’s what my purpose is.  — Yandy Smith

St.  Maarten – Giving Back to a Home Away from Home

The Howard University alumna first gave us a glimpse of her philanthropic work when she organized a trip to St. Maarten where she and her LHHNY cast mates brought much-needed supplies in the aftermath of Hurricane Irma that devastated the island in 2017.  Despite some of the drama that unfolded with her cast mates, she accomplished her mission. “We wanted to bring clean water.  We brought tons of clean water, we brought tons of rice, we brought tons of canned goods, food, we brought clothes.  And then we did a party at school for the kids.”

Her relationship with the island didn’t begin there.  She’d visited the island many times for a show she executive produces, “Icon of the Islands” – and, St. Maarten was home base.  Many contestants on the show were displaced and she was compelled to give back to the country that had welcomed her and treated her like family. “We are so incredibly over blessed here and I think that we forget how much we have that we don’t need.  We forget purpose… it was important for me, in that moment, to take care of people who took care of me.”

Mendeecees Giving in the Face of Trials and Tribulations

The same goes for her husband Mendeecees. Before Mendeecees went to prison in 2016, he spoke to a group of young men from Job Corps to tell his story.  Most other people facing a lengthy jail sentence would focus on spending time with family and focusing on the time ahead. Yandy says of his speaking to the boys, “This is something that is a part of our lifestyle.  That was our norm.  We tried to have a normal life even though faced with this horrific time, that we were going through.  These are things that we did often.” It’s one of the things that made her fall in love with him, “I love that he’s a humanitarian that wants to give back to his community.”

From Here to Infinity – A Big Bundle of Joy

Though, Mendeecees has more years in jail, like any mother Yandy has had to find the strength to move forward, maintain her businesses and keep life as normal as possible for their children.  She is the mother of two of Mendeecees’ four children and is proud to have welcomed a new bundle of joy—16-year-old Infinity.  Infinity is a young woman she mentored for three years through her nonprofit EGL PUD before adopting her earlier this year.

Yandy acknowledges receiving signs that she needed to take on a new aspect of her relationship with Infinity, who was in foster care, nothing made the answer clearer than receiving an urgent call from Infinity.  It was then that she knew that she needed to step up for Infinity in a different way.  It’s a decision she says has made her life and the life of her biological children better:

“She is a joy.  I have learned so much.  I know that people think, ‘Oh, you saved that girl’s life.’  No, she saved my life and my children, because there are so many things that we just took for granted. My children would have grown up different if there wasn’t an Infinity in their life to tell them, ‘You’re throwing away that food? You’re not going to eat that?  You throw that away?’ Just little things that we just took for granted.”

“We believe that strong, stable, secure, socially aware girls are raised and not born. And, I do feel like we have a personal responsibility to raise these girls whether they grew up in your house or not… It is my responsibility to protect and also help raise all of these girls that I come in contact with.  Especially now that I have a voice that they care about.  Why do they care about a reality star named Yandy’s voice? I don’t know.  But for whatever reason, they do.”

Over the summer she also hosted the Empower U Teen Summit that brought teens from the Throgs Neck Projects in the Bronx for a conversation between parents and their teens that included Remy Ma and other celebrity friends.  The goal was to get parents and youth to have conversation on things parents haven’t been able to get across.  Yandy, Remy Ma and others reinforced those messages to make a difference in the lives of the young people.

Philosophy of Philanthropy
Yandy supports disaster relief efforts, works to empower young girls and earlier this fall, handed out turkeys with Senator Brian Benjamin in Harlem.  Giving back is something she feels is a necessary part of her and her family’s life. And, is a great motivator for her to get up every day and work as hard as she does:

“The philanthropy is what feeds my soul.  It’s what feeds my spirit.  It’s what feeds my movement. It’s what makes me feel like, I want to wake up tomorrow.  There’s so much going on out here that makes me feel like I don’t want to get out of bed.  I don’t want Skylar or Omere to leave the house…but when I do things like this, it gives me a reason.  Maybe I can make the world better.  Maybe my children will be better than I am because they see what I’m doing and want to do it too… the only thing that makes me shoot Love & Hip Hop is I have a voice and I have a very different voice from everyone on the show. As much as I hate the stigma that comes with reality TV, I’ve got to be the voice… I feel like this is my only contribution that can make [an impact] on a wide scale.” 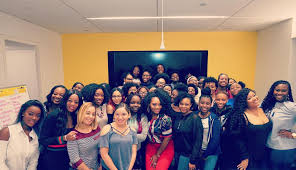 Did Someone Say All-Expense Paid Trip to Hawaii?!

Using her platform, she recently teamed up with a fundraising platform created by Executive Director, Wayne Anderson –  Outlierz.Rocks to offer an all-expense trip to Hawaii for a lucky donor all for $10 entry donation.  To enter for a chance to win, fans and friends can go to www.oultierz.rocks or click the link in Yandy’s Instagram profile bio – @yandysmith – to make a $10 donation.  Each $10 donation is an entry for a chance to win an all-expense paid trip for two to Hawaii, including with Yandy and other entertainment executives.  “I’m taking a donor to Hawaii with a guest to meet entertainment execs. You can be a change agent in someone’s life,” all funds raised will benefit Partners Uplifting Our Daughters.  Anyone who is interested entrepreneurship, business, entertainment, or just wants to support the development of these young ladies should enter by Sunday, December 16th.

There was a quote on the website for Yandy’s lifestyle brand Everything Girls Love that really encapsulates who Yandy is and the conversation we had, “balancing career and family in stilettos is the rule, not the exception.”

Latoya
Latoya Henry is the publisher and founder of Haute Giving: The Sexy Side of Philanthropy.

Comments Off on She’s the Boss: Ebonie Johnson Cooper, Friends of Ebonie

Airbnb Co-Founders Commit Half Their Fortunes To Charity

Comments Off on She’s the Boss: Sharon Content, Founder and President, Children of Promise NYC

Get the Latesst: Haute Giving

NEW POST ALERT! Rihanna's Clara Lionel Foundation Does More than Bring Out Entertainment Royalty. Find out the cause behind Rihanna’s Diamond Ball and check out the celebs who came to support. (PICS/VIDEO) @badgalriri @claralionelfdn #Rihanna @FentyBeauty @SavagexFenty #ClaraLionelFoundation #Philanthropy #Charity Link in the bio.